In a recent report, antivirus company PandaSecurity reported capturing 18 million new malware samples in Q3 of 2016, alone. If we do the math right, this means that an average of 200,000 pieces of malicious content were on the loose PER DAY. And what’s more alarming is the fact that these are samples caught by a single security company. 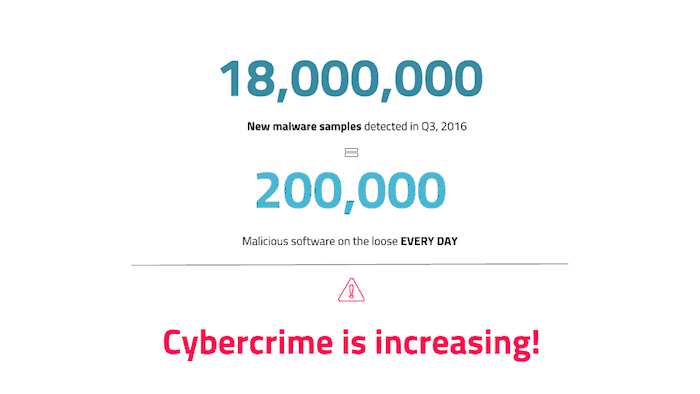 Attacks are not aimed only at individuals.

Even more alarming is the fact that between January and September 2016, such attacks on business increased from one every 2 minutes, to one every 40 seconds.

And the most alarming fact – one in every three Ransomware victims doesn’t get their data back even after paying.

Cybercrime is not slowing anytime soon. That’s why, in order to prevent losing your data in a Ransomware infection, understanding cybercrime patterns is important.

In this article, I talk about how you can stay one step ahead of cyberattacks and protect yourself against Ransomware.

Before we start though, let’s take a brief look at what exactly Ransomware is.

Ransomware is malware that upon infection, blocks access to some or all the information stored on your device.

In order to retrieve your data, you are required to pay a ransom usually in Bitcoin on another e-currency.

Although it has been gaining media attention only in recent times, this malicious model goes way back in the 1990s with the first-known malware capable of encrypting file names.

Since then, however, Ransomware has evolved, now including encryption with a private key stored on the cybercriminal’s servers.

As a result, even if the user removes the malware it would still keep the files inaccessible leaving them with the only option to pay the due.

Speaking of ransoms, the average ransom demand skyrocketed in 2016 to $1,077, in comparison to $294 the year before, mentioned in a recent report by security firm Symantec.

Ransomware Epidemic – How It Spreads?

The main sources of ransomware infection are email links and attachments, followed by web applications and social media as quoted by Osterman Research, Inc.’s recent report.

In fact, in another report conducted by PhishMe, in Q3 2016 – 97.25% of phishing emails contained some form of ransomware, compared to 92% at the beginning of the year.

Unfortunately, 30% of such phishing emails get opened

How Can You Protect Yourself Against Ransomware?

As such forms of malicious content evolve by the minute, it is important to be proactive and take measures before you get hit with a ransomware breach.

Once on your device, Ransomware will affect the files that are located in drives that are ‘mapped’ like connected external HDDs, USB thumb drives, folders on your network or in the cloud.

This means that, for example, if your Dropbox is mapped locally, your Dropbox files will also fall victim to the malicious software. Fortunately, there are powerful ways you can protect your files against crypto attacks like Ransomware.

Back Up Your Files To pCloud

It allows the user to restore their pCloud account to a state up to 180 days in the past.

This means that if your device gets infected with Ransomware, you can easily restore your files in pCloud to what they were one hour ago, without paying any ransom to your cyber attackers.

This great feature makes pCloud the perfect place where to back up or even more your entire digital album.

Unlike other similar services, which download your content your laptop and only sync changes, pCloud Drive doesn’t take any space from the local HDD. On the contrary, it uses only the space you have from your cloud storage account, basically giving your laptop up to 2 TB of extra space.

You can edit large files like raw photos, videos and others directly in the cloud with pCloud Drive and it won’t take any local space from your Mac or PC.

Another perk the app has is that it can also sync your local folders with pCloud so that you can recover them from your phone and your tablet.

p.Cloud Rewind – How It Works

Syncing your files with pCloud Drive can become a powerful way to recover all your files once they have been infected by Ransomware.

You’ll just have to:

2) Find the section Rewind from the left menu

The whole process takes no more than a minute to complete. After you hit Rewind, pCloud will show you a snapshot of entire account at the time you had chosen.

From then on you will be able to choose between downloading the files or saving them in a folder in your pCloud account.

If you decide to restore the file that you need, in pCloud, it will be saved in a special folder – Rewind in the main directory your pCloud account. No ransom paid and no lost files.

Profits from Ransomware were estimated to have reached more than $1 billion dollars in 2016.

This success has led to the creation of a ransomware-as-a-service model, where any would-be criminal can take advantage of the malware for profit.

If the Internet world saw Ransomware attacks skyrocketing in 2016, forecasts predict them doubling in 2017.

Although infections don’t follow a particular pattern, more and more businesses are becoming victims of the bad software.

That’s why, being aware of how Ransomware works and what countermeasures to take can prevent a potential infection and more importantly – data loss.

How to Stop Worrying About Every Password Breach That Comes Along

Hubic stops developing and accepting new registrations. What is the best alternative?

The Simplest Ways To Make The Best Of Sharing Large Files